Born in Shawnee, Oklahoma, Derek Weaver grew up watching his dad ride Bobbers and Triumphs.  At age six, he wrote Santa for a mini-chopper. In 1969 Derek lost his dad in an auto accident with a drunk driver.

Derek's mother remarried Ken Thompson who was an avid car enthusiast and owned his own automotive equipment business.  Ken bought Derek and his brother Mack a pair of Suzuki 50 mini-bikes and later moved them up to Suzuki 125 dirt bikes.  Derek's passion for cars along with Ken's knowledge of the automotive industry drove his interest in working at his stepfather’s business.

Ken was the factory representative for FMC Corporation's automotive service equipment division (currently owned by Snap-On Tools and marketed as John Bean).  Starting in 1977 at the age of 15, Derek began working at Ken's equipment business in Fort Worth, Texas servicing everything from car lifts to tire changers.  Ken Thompson Company was responsible for the sales and service of wheel alignment equipment, computer wheel balancing, brake lathes, engine analyzers, tire changers, and automotive lifts for Oklahoma and most of Texas.  One of Derek's first tasks was to rebuild and caibrate the popular John Bean Visualiner optical wheel alignment system. 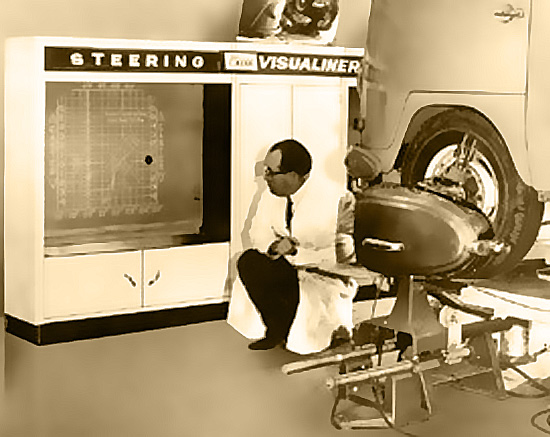 In 1947, the John Bean Visualiner became the first optically based alignment system in the world and quickly became the standard of the industry through the 70's. 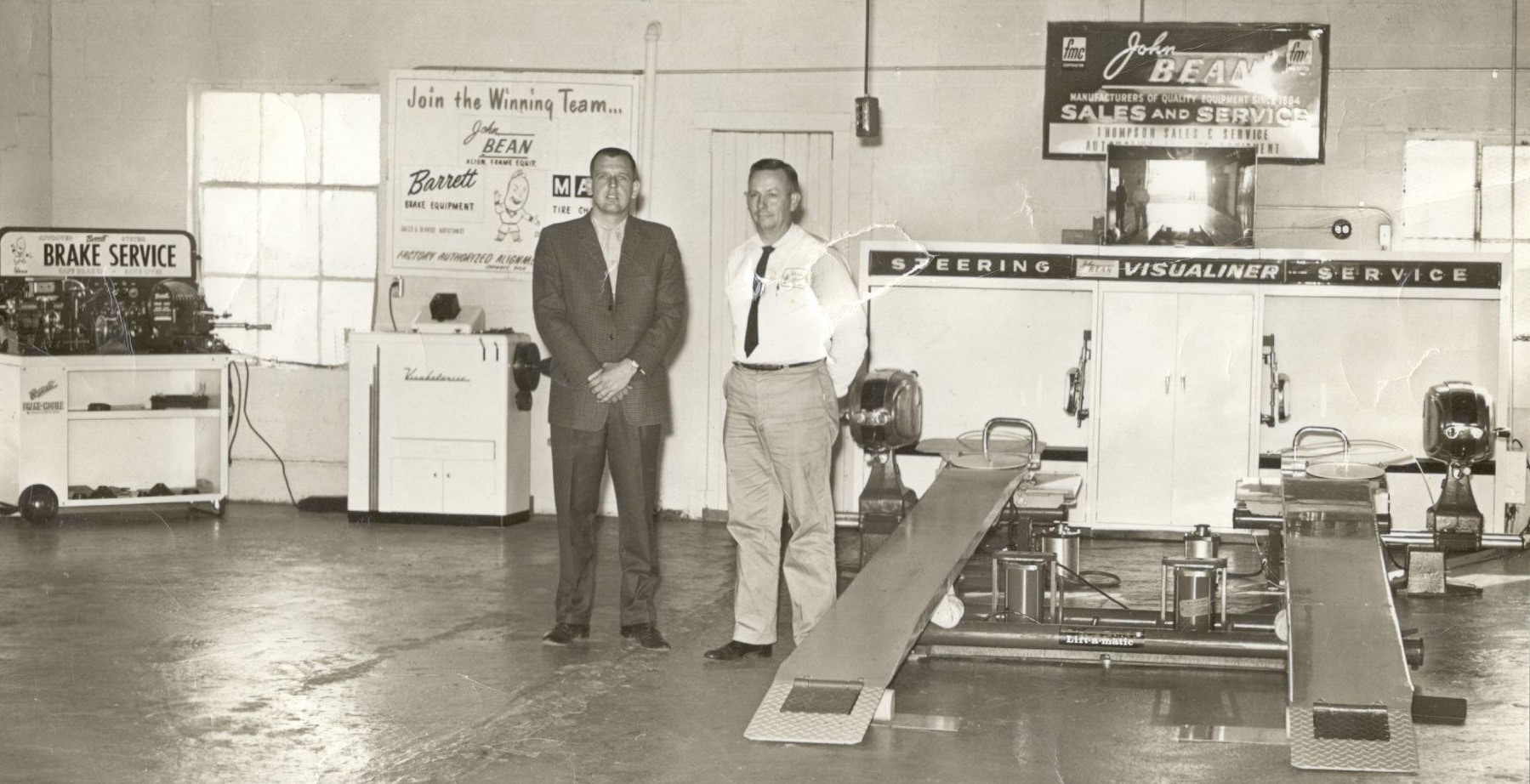 In 1967, Ken Thompson (left) in his Oklahoma Showroom/Training Center.

By 1980, Derek had served as a factory certified service technician for both FMC Corporation and Ken Thompson Company.  In 1982, Derek lost his brother Mack in a motorcycle accident when an elderly man turned left in front of him.  Derek was married in 1983 and was also appointed to the position of service manager as well as equipment sales manager. 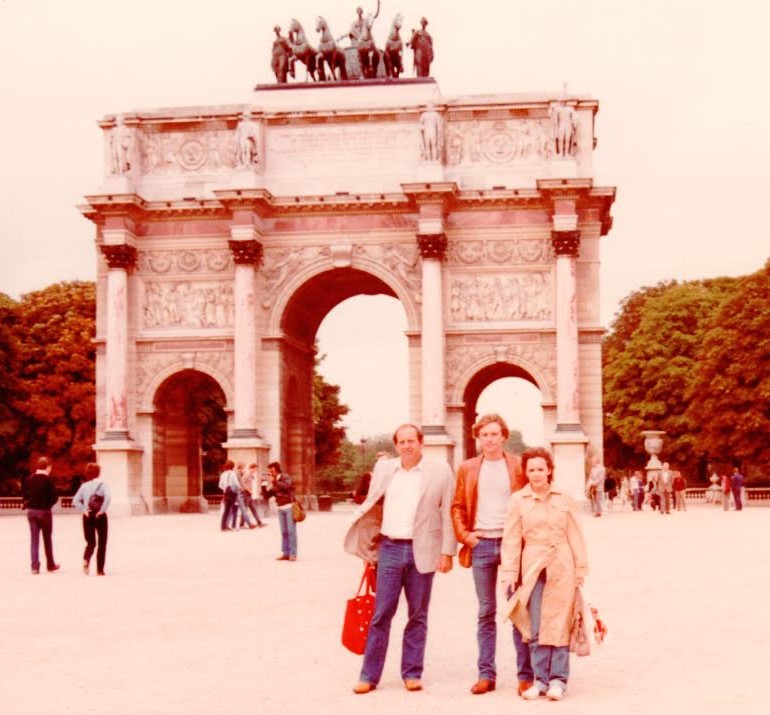 1982 Ken Thompson with Derek Weaver (age 20) in Paris at the Arc de Triomphe due Carrousel. On this trip, Derek & Ken attended Automechanika in Germany along with the rest of the Group 10 company. From this trip, the group acquired the rights to import the first asymmetric car lifts to the USA. The asymmetric design was an instant hit and continues to be the dominant feature of most car lifts sold today.

In 1984, at the age of 22, Derek was signed as the factory sales and service representative for FMC Corporation in Texas.  This marked the beginning of Derek Weaver Company and Ken's move into the emerging above-ground car lift industry.  During the next five years Derek successfully ran the Texas territory for FMC Corporation, selling and servicing wheel balancers, tire changers and car lifts to various local distributors and national accounts including Wal-Mart, Goodyear, Pep-Boys, Exxon, General Motors, Chrysler, Ford, Nissan, Western Auto, Auto Zone and many more.

In 1999 Derek founded the Direct-Lift brand.  In 2002, Derek partnered with Ken Thompson to cofound the Direct-Lift marketing concepts.  Direct-Lift began as a division of Derek Weaver Co., Inc. and was based on Derek and Ken's marketing strategies.  Later in 2002, Eric Shen and John Chang became manufacturing partners with Derek and Ken in an effort to grow the product line.  Derek not only is the founding member of Direct-Lift but also operates the Direct-Lift sales and distribution warehouse in both Fort Worth, Texas and Myerstown, Pennsylvania.

By 2005, Direct-Lift became the largest U.S. supplier of lifts to the hobbyist/enthusiasts industry.  By utilizing their volume manufacturing in an ISO 9001-certified plant, Direct-Lift has been able to deliver high-quality products at direct prices.  Direct-Lift's unique marketing approach has given the buyer the most cost-effective way to buy a quality lift.

Rotary Lift Consolidated/VSG acquired Direct-Lift in 2007 and is now a valuable team member of the largest lift company in the world. Today Direct Lift is a proud member of the Vehicle Service Group, LLC. (A Dover Corporation company) family, and is the number one supplier of above ground hobbyist lifts in the U. S. and Canada. Dover Corporation, a Fortune 500 company listed on the New York Stock Exchange, has been in the business of producing and selling safe and reliable vehicle lifts for more than 95 years.

2019 marks the 35th Anniversary of Derek Weaver Company, Inc. and the 42nd year of Derek's experience in the automotive industry. A passion to compete and a desire to serve the customer before, during and after the sale have been instrumental to Derek's success and longevity.